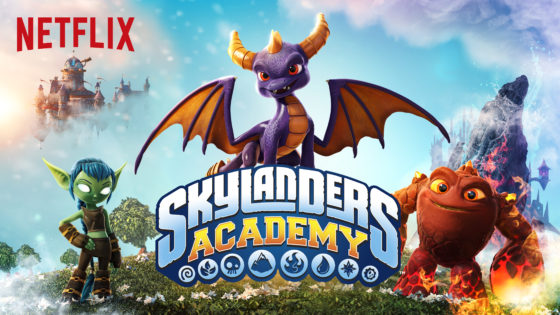 As a member of the Netflix #StreamTeam I sometimes get early access to shows and I was super excited to get access to the new Skylanders Academy show that is coming on October 28th. I was able to get a screener of the pilot episode and I really liked it. The show has the humor and fun of the video game and it has been a long time coming to get Skylanders into an animated format. The animation is excellent. You can check out the trailer today and the full season on Friday.

The first episode was really well done. The show centers around three main Skylanders: Stealth Elf, Eruptor and of course Spyro. They are about to graduate from Skylanders Academy. While Stealth Elf and Eruptor are ready to graduate, a cocky Spyro thinks that he is ready but he certainly has a lot to learn about being part of a team.

Spyro is played by Justin Long and not Josh Keaton who has been Spyro in all the Skylanders video games. It is probably my biggest pet peeve of the show even though Justin does a decent job as Spyro. Spyro is really, really cocky and he ends up failing to become a Skylander during the Skylander Games. So, he has to do some deep soul searching and help when the time is needed.

Stealth Elf is played by Ashley Tisdale to great comic effect. She is the voice of reason and sensibility on the team. She motivates Spyro to be the hero that we all know he will become.

Eruptor is played by Jonathan Banks, a character actor and voice actor that you have probably seen or heard many times before. I recall him from Community. Eruptor can be counted on for some comic relief in his somewhat clueless questions.

Kaos is of course voiced by Richard Steven Horvitz because, let’s face it, NO ONE else could ever get that voice right. You cannot replace the voice of Kaos, he’s one of the biggest parts of Skylanders and has been in every iteration of the game. Kaos has all sorts of schemes as, we’d expect and it is up to the Skylanders to stop him. Actually, in the first episode it is up to Spyro himself to stop Kaos.

Rounding out the cast we have Norm MacDonald as Glumshanks and although he isn’t the original Glumshanks voice from the games he does a really great job as the character. He’s funny and glib and basically does his usual Norm MacDonald thing and it works well for Glumshanks.

The show is filled with fun action and lots of jokes. You also see tons of Skylanders around the academy and they may or may not have much to do or say but occasionally they will get a good line or two for comedic effect. I’m definitely excited to see the whole season when it comes to Netflix on Friday. END_OF_DOCUMENT_TOKEN_TO_BE_REPLACED