With March almost upon us here I wanted to let you all know about a blogging event that I have put together. It is called Blogs, Brews and Belly Laughs. I’ve been spending quite a bit of time downtown at The Speed of Thought Playhouse. I’ve been there for an improv comedy show, I’ve been there to see bands perform, I’ve been there for a Stand up comedy show and I even sat in and watched the improv class one night. Eventually I will get up the nerve to join in the class.

Blogs, Brews and Belly Laughs will take place on March 13, 2009 at 6:30pm. That is when bloggers can show up. Then there is a $10 charge to stay for the Speed of Thought Players Comedy show. The comedy show is certainly worth the price of admission because it is funny and it encourages audience participation. We may even work out some way to display real time Tweets for suggestions in the improv games. Here is the information that I’ve already posted to Upcoming.com, Going.com, a couple of Rhode island message boards, Craigslist and of course facebook.

“BenSpark.com in collaboration with Speed of Thought Playhouse present Blogs, Brews and Belly Laughs. This is the first meeting of bloggers in the Greater North Attleboro area and beyond.

(You don’t have to live in North Attleboro to attend, if you want to come to the event we are happy to have you no matter where you live.)

The night will begin with a meet and greet in the Speed of Thought Playhouse. There is free wi-fi so feel free to bring a laptop or other wi-fi enabled device. During the Meet and Greet you will have a chance to Enter BenSpark’s PhotoBooth for a chance at cool swag. Also I am an IZEA Insider and I’ll be able to talk to you about some great sites like IZEA and SocialSpark.

At 8:30 the Speed of Thought Players will perform their hilarious comedy improv show. The cost of the show is $10. Bloggers are encouraged to stay for the show. You can bring cameras and video cameras with you.

I will try and broadcast the event Live through USTREAM and also be live Twittering and also sending Live posts to UTTERLI.

So come on down to the Speed of Thought Playhouse for a great time, some laughs, some beers and other bloggers.

What I am really excited about aside from meeting some new and interesting people is BenSpark’s PhotoBooth. I have been working really hard securing sponsors for this event and I got some great ones and some great prizes. I’ll be supplying a few BenSpark.com hats, IZEA Swag, BluFrog Energy Drink, Ten Bills.com T-Shirts, an XShot or two and I also received two PoGo printers from ZINK Imaging along with over 100 sheets of PoGo ZINK Paper. But you are going to have to wait till March 13 to see what I do with that.

Here is the flyer I made for the event. 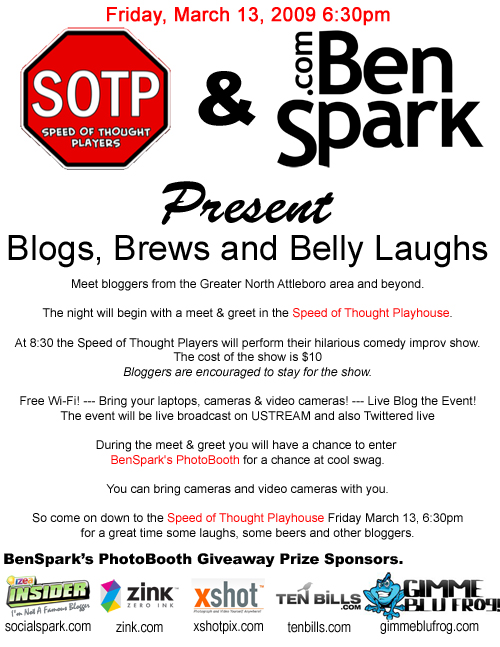