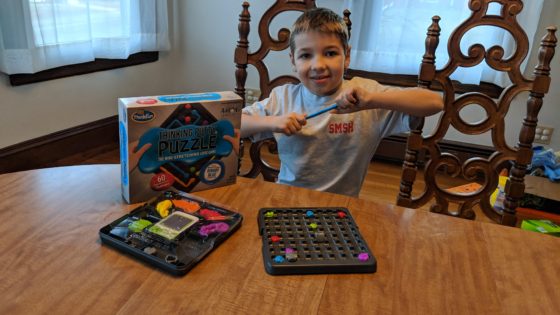 ThinkFun is a toy company that makes some of the best puzzle games out there for kids. Adults, too. We received the game for free to play with and review. Opinions are our own.

The kids love anything to do with slime or putty. They love to make it and they love to buy it. The brand of putty that they love is Aaron’s Thinking Putty. They are always asking us for tins of it whenever we go to An Unlikely Story. So, when I showed them Thinking Putty Puzzle – The Mind-Stretching Logic Game featuring Crazy Aaron’s Thinking Putty they couldn’t wait to try it out. The set comes with six different colors of putty. That also includes the exclusive “Binary Blue” color that was made just for the game. It is the exact color of ThinkFun’s logo.

Andrew has played with the game the most but he wasn’t up for making the video so I did the bulk of the video and got him featured in it for a bit. 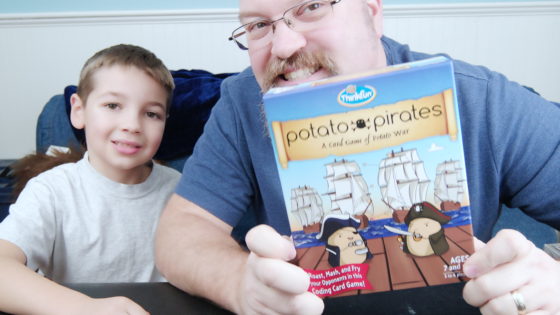 We received a copy of The Potato Pirates from ThinkFun for free to play with and review. Opinions are our own.

When we first tried out this game it was just Andrew and me playing. The thing is, you need 3 people to play the game properly and with even more people playing the game takes longer but is much more fun. We played as a full family of four later on and it was a fantastic game that took us about an hour. The game has easy concepts to understand but they build upon each other and the sneaky pirates teach kids coding concepts.

Gameplay is a series of turns where players create functions for their attacks and then attack on subsequent turns. So the first time around the pirates set up their attacks. On their next turn they decide which players to attack. Occasionally players will find a Potato King and shout “All Hail” and that makes the whole table shout and salute as fast as they can so as not to be the last. The last player to shout “Potato King” and salute as to give away 2 of their potato pirates. There are seven potato kings ans so there ends up being lots of shouting and laughter.

It was great seeing the kids gain understanding on how to make their attacks more devastating through proper coding techniques like if then else statements. While I did win the game in the end the kids made it quite difficult for me to do so. I think the more we play the harder it will be for me to win against these quick learning kids.

Andrew and I made a video about the game.