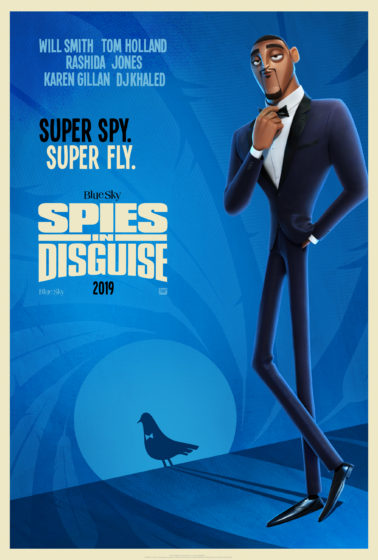 Will smith leads a fun cast of characters in this interesting take on the spy movie. The movie starts out in a typical way where there is this ultra-tough, ultra-cool, and ultra-totally-unbeleiveable-makes-it-look-easy-stunts-and-driving-and-being-super-fly spy, Lance Sterling. Even his name screams super spy. Well, things do not stay that way for long as Lance is transformed into a pigeon because pigeons are everywhere and no one pays them any mind at all. That makes them the ultimate spies. At least that is what a young tech wizard, Walter Beckett, believes. So soon, Lance Sterling find that he is going to need help from Beckett and they must work together more closely than ever before. Take a look at this fun trailer for the movie.

In addition to Lance Sterling looking cool and sophisticated his ride is equally so. Audi brings futuristic design and mobility to the big screen for the first time with the Audi RSQ e-tron, a fictional, virtual performance concept car created for 20th Century Fox’s animated film SPIES IN DISGUISE. The full-battery electric model, created by Audi Design in cooperation with Blue Sky Studios, combines automated driving with artificial intelligence and transformational technology. The RSQ e-tron will be driven by super-spy Lance Sterling, voiced by Will Smith, and appears in the film’s trailer live today. END_OF_DOCUMENT_TOKEN_TO_BE_REPLACED