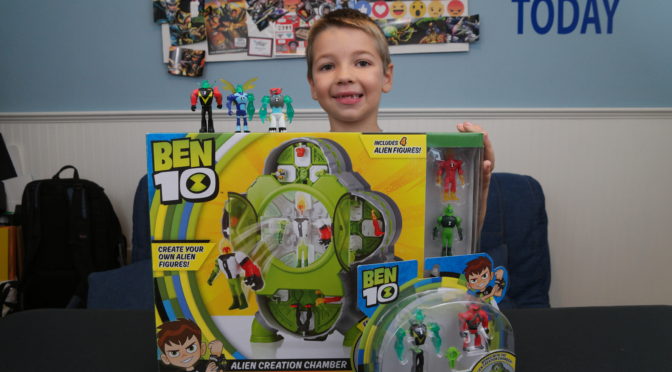 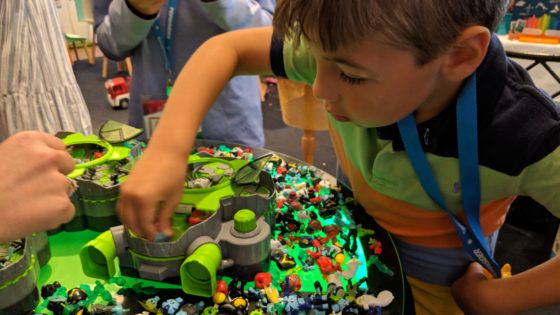 Ben 10 is one of Andrew’s favorite shows, but he doesn’t get to watch it too often. So, when making this video he was a little light on remembering the names of the aliens. I wasn’t that much better. Playmates Toys sent us the Ben 10 Alien Creation Chamber toy for free to play with and review. This was a toy that Andrew took to at Sweet Suite. We had to pull him away and when he finally did leave he had a ton of little aliens to enjoy. The opinions that are expressed in this review are our own.

At Sweet Suite there were so many toys and it was the first time that I was able to bring the kids. While they occasionally got hung up at one table or another they generally moved along to the next. Not when we got to the table that had multiple Ben 10 Alien Creation Chambers and a table full of alien parts! Both Andrew and Eva were drawn to this table and enjoyed making alien after alien. Andrew liked it so much we left him playing (within earshot and eyesight) while we went a couple of tables down. He had a grand old time playing with this and so I had to ask for one for review. Once we unboxed it and made the video below, he continued to play with it and make alien after alien.

I think we missed a key thing in the video and I will explain it a bit through the photos below. END_OF_DOCUMENT_TOKEN_TO_BE_REPLACED 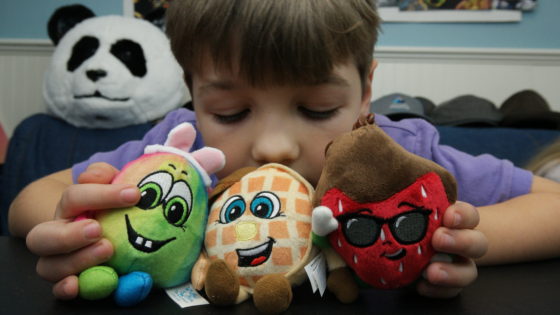 We received some Whiffer Sniffers for free to unbox and review. Opinions are our own.The Whiffer Sniffers Line continues to grow and expand. This newest series, Series 6, includes some fun characters including an Easter themed character named Willy Hyde. He looks like an Easter Egg and smells of Easter Candy. Other fun characters are Chill Bill, Danny Dipperelli, Waffle Aaron and Ima Bubblepopper. For only $6.99 you can get one of these characters to clip on your backpack and the cent lasts all year long. These are collectible characters and there is a new feature called the Sniffer Switch versions. In a switch version a subtle change occurs. For example Shirley Cone (available in mid-April) arrives with pink and blue sprinkles. Her Sniffer Switch version boasts purple ones! The change is subtle but kids enjoy collecting these plush pals, as they randomly appear in stores coast to coast. In fact, Grandma may be enlisted to hunt for a particular Whiffer Sniffer in her hometown specialty store!

The kids unbox a whole bunch of these cute characters in their latest video and then below that I’m going to give away a set of three randomly selected Whiffer Sniffers to a one of my US based readers.

Enter for a chance at 3 Series 6 Whiffer Sniffers below.