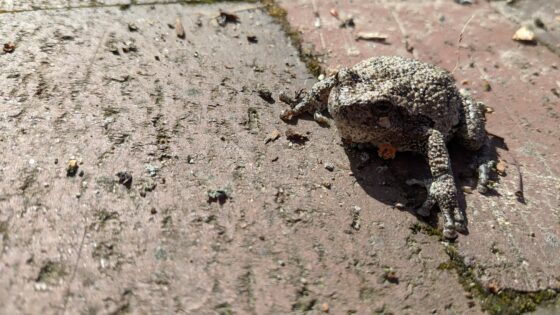 We had a hoppy little visitor to our house today. No, it wasn’t a late Easter Bunny. It was a gray tree frog. This little guy appeared on our back patio after last night’s wind storm. I’m pretty sure that he got blown out of the tree or was on one of the branches that fell from the tree.

There were a large number of good sized branches that had come down from the tree. I picked up the largest ones early in the morning. Later on, andy wanted to play basketball so he picked up a bunch of the smaller one and when he was picking them up he accidentally picked up this frog and got a bit freaked out. I’m pretty sure the poor little guy was stunned from his falling from the tree. I nudged him over to the stone wall and then picked him up and put him in the leaves near the tree. He’d hop away on his own time.

We checked on him later and he was gone.

Later in the afternoon we went for a walk/bike ride. Andy had seen his younger cousin tooling around on her bike and he’s felt embarrassed that he does not know how to ride a bike without training wheels. So he asked me to take them off.

I took them off and let him see if he could ride with a little help. He’s got no sense of balance on the bike, the bike is too small and he’s very afraid of falling. Oh, and I have no patience for teaching this. So I put the training wheels back on. However, the left wheel is loose and keeps moving. Andy leans on his left side the whole way around the block. Leans, nearly falls freaks out, over and over. We make it around the block and I tighten everything up again. Then the kids want to go around again. I say yes.

Despite the left training wheel being nice and tight and rigid Andy now leans to his right the entire ride around the block. That wheel apparently was even more loose than the left one. He does not lean to his left at all on the very same route that we just took. By the time we got back around the corner I nearly put a free sign on that thing and stuck it in the yard.

We’ll have to find an empty parking lot or some area where he has space to ride around and learn without being along the road. He also needs a larger bike. He was pretty much outgrowing his when he originally got it.

Meanwhile, Eva is riding really well. She spent most of her time on the ride waiting for us at every stop sign.