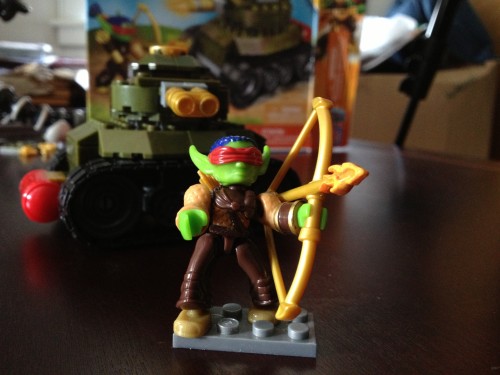 We were sent the Troll Tank Gun Down set to play with and review. Opinions of the toy are 100% my own.

Flameslinger is one of those characters that I enjoy playing as in Skylanders games, very much. He’s got cool powers, is blindfolded and a crack shot with the bow and arrow. He’s also one of those characters that I like to use when you have to be speedy. Flameslinger hauls and he burns up everything around him. I was very pleased with Flameslinger as a MEGA Bloks toy. He looks great, has some fantastic details and equipment. He also gets to take on a tough troll tank.

I made this review video where I assemble the set. Just a little behind the scenes on this. I filmed it upside down so I could freely assemble the set and then spun the video right side up in Adobe Premiere Elements. I also made the music on Garage Band. My first time making some music. I started with one of their pre-made songs and added to it.