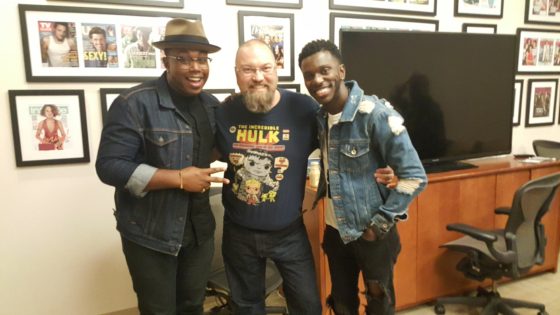 On October 9 – 11 I attended a Disney Press Event. My hotel and airfare and meals were taken care of while I was in L.A. Opinions and observations as well as recaps and such are all my own. This post may contain some affiliate links to Amazon.com.

On the second day of my trip I went to a few places including the ABC Studios. There we had a group interview and screening with two cast members of the new ABC comedy, The Mayor. We met with Bernard David Jones (“Jermaine Leforge”) and Marcel Spears (“T.K. Clifton”). Marcel is to my right and Bernard is to my left in the photo above. Immediately upon walking into the room these two guys put us all at ease. They were shaking hands and giving out hugs to everyone. They were as excited as we were to watch an episode of the show. I think that they were more excited. The Mayor is the only new Fall comedy that ABC picked up this year and that has to be a lot of pressure for a freshman show.

We settled in to watch the Episode titled “The Filibuster”. That episode was airing that very night and so we were doing a lot of tweeting about the show. I had watched the pilot episode and it was funny enough. However, I really liked the second episode. I saw that the characters were beginning to change and develop a bit. These three young men were now in charge of the well being of their city and you could tell that they love the city and would do what they need to do to bring it the best that they could. Watching a show or a movie with the people who made it is always interesting. There is an energy that is hard to match. You could tell that these guys put so much hard work into their characters. When the episode was finished we were able to interview the guys and it was a fun one.

Both of the guys went to a casting call. Marcel originally read for the part of the main character, Courtney Rose. That role went to Brandon Micheal Hall. The casting director liked Marcel so much that they needed to find a place for him on the show. That place was the role of T.K. Clifton, Courtney’s friend who is very enthusiastic but not all the way the smartest guy around. But he does have a lot of heart. END_OF_DOCUMENT_TOKEN_TO_BE_REPLACED 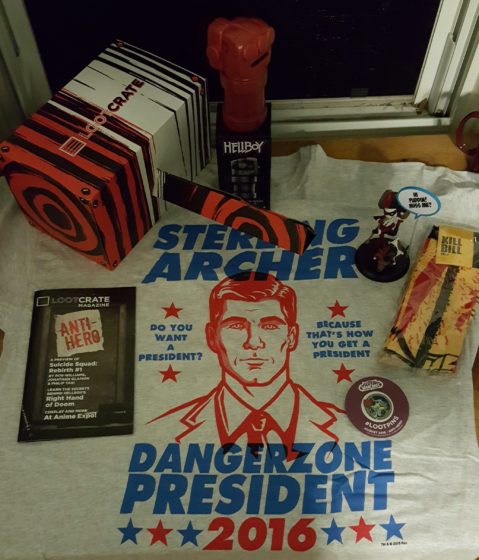 Each month I receive a free LootCrate to review. Opinions are, as always, 100% my own.

I really liked this crate. This one had some great stuff from Harley Quinn, Archer, Hellboy, World of Warcraft and Kill Bill. The only thing on that list I’m not much of a fan of is Kill Bill. I never watched that movie so it isn’t really something I have much to say about.

I really like Archer and the shirt definitely captures one of the more fun recurring callbacks of the show. Also, perfectly timed for the Election Season.

The Hellboy item is also cool, but I won’t be saving much in it. It is a bank of Hellboy’s hand. It isn’t that large, certainly not Hellboy-sized, but it can hold a couple of bucks.

The Loot Pin is a World of Warcraft one and the incentive for that this time is for a bunch of online game packs as part of the overall game, for new players only. I may just give it a try.

There is also a great statue of Harley Quinn from Batman: the Animated Series, included. Such a nice sculpture of Harley and one of her Hyenas, not sure if it is Bud or Lou.

You can see everything in the video below.