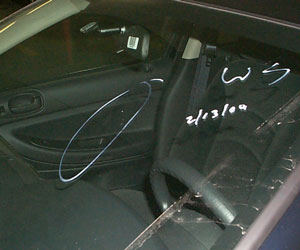 Yes I’ve been a slacker. Been on the road so long that I forgot what timezone I actually live in. Couple of things to rant about. Car Rentals. Notice the picture I’ve posted.

That is the tiny chip on my windshield that Hertz is slamming me with some fees about. Some rock or something kicked up on the road and whacked the windshield. I guess it was somehow my fault that I didn’t swerve off a bridge to miss the rock. Arrgh!

Oh and Logan airport sucks. As usual. The worst airport I ever have to travel out of. Especially terminal B.

The LIVE visit this week is going rough and I’ve been up since 5:00CST. Need sleep. Need to be home. Need it to be March 13th. That is when I’ll be home for four weeks. So everyone I’ve been promising plans to do things with will have to collect during those weeks. Anyway when my thoughts are even slightly more coherent I will post more. 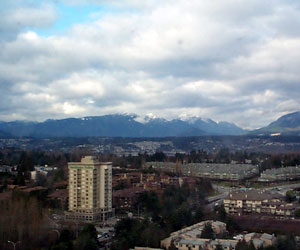 So I’m sitting here in the Vancouver Airport awaiting my 10:45pm flight. It is now 11:30pm. Which is real close to my original flight time. Fun, fun! Have you ever had to wait for an entire 777 airplane’s passenger list to be re ticketed? I have! And let me tell you, it is as joyful as they say it is. 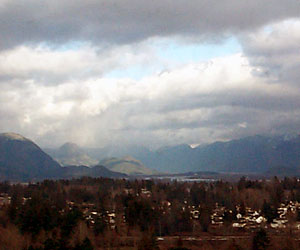 Standing in line listening to ‘experts’ discuss what can be done to improve air travel. Guess what? Shut up! Nobody cares what you think. Why is it that it is always the idiots who express their opinion to anyone and everyone, who are the loudest people on the planet? Just let me stand in line, and get my new ticket, without listening to you prattle on with your conspiracy theories and witticisms. Okay my rant is done, for now. 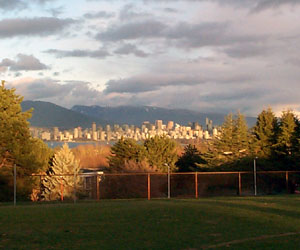 I have a feeling that we won’t be making our 11:50pm departure time either. Oh well, another nail in the coffin regarding the theory of Allison’s that Vancouver is evil. 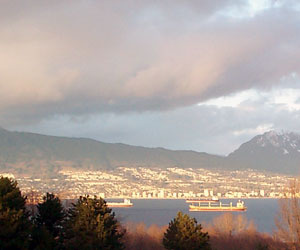 Vancouver however is not evil. I look forward to returning in two weeks to do this once again. Today I had some time after the training to explore Vancouver a bit. I drove back to my hotel and took a few pictures because, guess what? It actually does get sunny here. Go figure. The mountains I saw two weeks ago reappeared, albeit covered mostly in clouds. 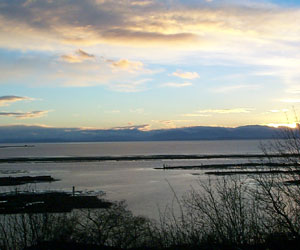 I came back from Langley hospital by try-roading. Try-Roading is a term of Allison’s for trying whatever road you come across to see where you can go. Why is it that the view from a fast moving highway is one of the best places for pictures? I kept trying to find a place to stop and take some good photos. 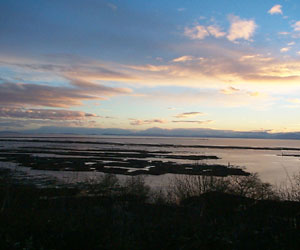 After the hotel I headed out to Port Moody to find a Harley Dealership to purchase a pin. I found the shop easily, however they did not have a pin. They did have some great shirts, but they were out of XL’s in almost all styles. It is always the way. Oh well. It was a nice shop with a lot of the new 2004’s. 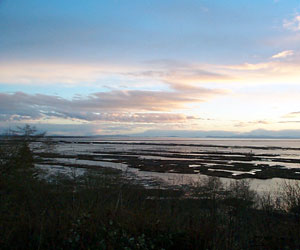 After the trip to Port Moody I took a trek along 7A West to downtown to look for the Vancouver Hooters. The road it was supposed to be on was fraught with dead ends and one ways. So I did not find it. I headed up Granville street and took a right onto Broadway to head towards Marine Dr. I stopped at a little park that overlooked the city, took some pictures, and made a call home to wish my Mom a Happy Birthday. I went from there to the University of British Columbia and Marine Drive. That is were I got some nice sunset photos. 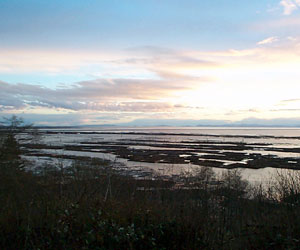 And finally I got to the airport. That was around 5:30pm. The airport here is very nice lots of little shops and restaurants. I took a seat on the level overlooking the food court and went to work finishing my latest Dirk Pitt Adventure, Shock Wave. A very good novel by Clive Cussler. I’d like to read all his books in order but haven’t taken the time to find a comprehensive list and stick to it. I just pick one of them off the shelf at random and read them. But the good thing about a Dirk Pitt Adventure is that you don’t need to read them in order. They all have the same basic plot devices and proven formula.

They are what I like to call TV Books. These are books that require little to no concentration while reading. That, and you can picture the characters vividly and the action plays out in ones head like a TV show while you read.

The plane finally took off at 12:15pm. We landed in Toronto at 7:35am. My flight began boarding at 8:05am. I ran down to get my bags, waited furiously in line till my bag came out, knowing that if it didn’t come out by 8:15am I would be stuck till noon. Once that came out I rushed to the gridlock of customs.

I was with an English woman who said, well looks like time to put on the ‘English Charm’. I don’t seem to see her on the plane anywhere. Looks like American Ingenuity won out. I just slipped through one of the mazes into a group of Asian passengers who weren’t paying attention, got up to the front of the line and dashed through customs threw my bag on the belt and flew through security, ran down to the tram, it is now 8:30am, flight leaves at 8:40am. The tram sat around waiting while I practically had an aneurysm. Finally with what seemed like hours we were under way. Once in the satellite terminal I was able to run to the gate. The last person on board, but I made it! On my way home to Boston! Yeah! And party weekend ahead. But first a little nap.

P.S. – So, it turns out that, that was not the end of the story. Despite my fancy footwork in Toronto I was not fast enough to get my bags on the same flight as the one I was on. Nope my bags were retrieved from my front porch on Sunday morning at 3:45AM. Apparently, the slip for my name and address was written over with the address of another lucky soul whose bags also dislike traveling on the same flights. At least my phone number was readable and the courier company called and we got things straightened out.

P.P.S. – Turns out my English friend was able to use her ‘English Charm’ (and some American ingenuity) to make the flight as well.