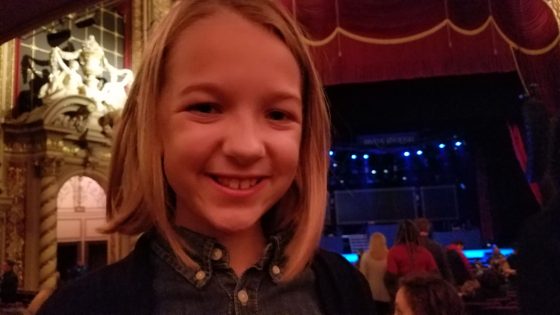 We took Eva and Andrew to their first major concert. It was Lindsey Stirling and her Brave Enough Tour. If you are unfamiliar with Lindsey Stirling, she has a great story. Definitely someone that you want to support because she has such talent. Here is Lindsey’s YouTube Channel. I began sharing Lindsey Stirling videos with Eva when she was 5 years old. She has been a total fan ever since. So, for her birthday I saw that Lindsey was coming to Boston so I got tickets to the Wang Theater. It is a beautiful theater in Boston’s Theater District in Chinatown. We had a great meal of Sushi before the show and also big cookies from Panera because we ended up there an hour early because I read the times wrong, well, at least we weren’t late.