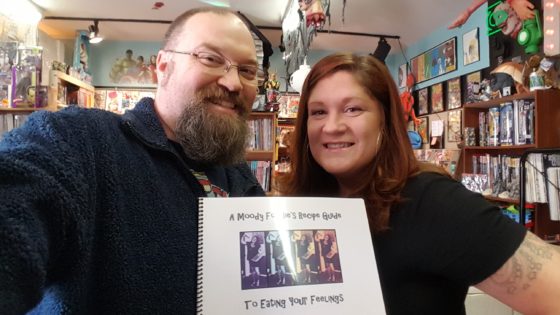 Today was Halloween ComicFest. This is a yearly event that occurs at comic book shops all over. I go to Wild Time Comics in South Attleboro. Randy and the family do an amazing job setting up the place for the event. This year my friend Laura was at the event promoting her book, the Moody Foodie. I picked up a copy and it is hilarious and filled with some delicious recipes. She had some samples at the event and they were very tasty. END_OF_DOCUMENT_TOKEN_TO_BE_REPLACED 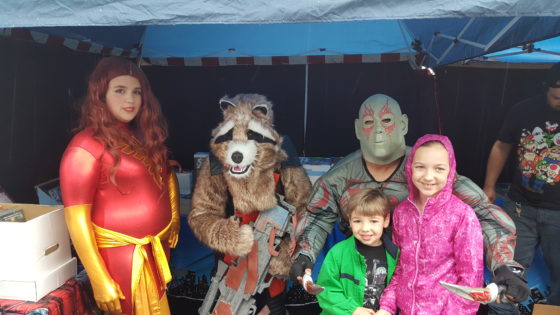 Attending Free Comic Book Day is a yearly tradition that I have shared with Eva ever since she was 2 years old. Also with Andrew when he was 2. I missed one year because I was away on a trip but otherwise I have been there and we have been to Wild Time Comics to celebrate the day. To be perfectly honest, as I was driving home after being awake for nearly 28 hours and the rain poured down my heart wasn’t quite in it. When I pulled into the driveway and everything was we and soggy and dreary my heart wasn’t in it. I was ready to just crawl into bed and sleep the day away.

I went into the house. The kids were all excited, they had taken baths and were getting ready to attend Free Comic Book Day with Dad. So I laid down in bed for close to an hour to get a second wind before taking them over to the comic book store for the opening of the event.

When we got there the rain started again and we stood under some tents. Well, Andrew and I did but Eva refused because there were some of the creepy statues from Halloween ComicFest. Eva refuses to go to that day with me, it terrifies her. Andrew gets a little scared but I think he’s just feeding on Eva’s vibe.

The doors opened and we went in. Andrew immediately went all around and I had to monitor him while trying to pick the comics and make sure that Eva was seeing certain comics that I knew she would like. Andrew picked out one comic and then went to the free candy The one he picked was one that we already had from a Halloween ComicFest and so I picked out the second one which was Animal Jam. It wasn’t until we were in the car that I noticed that we had gotten two of the same one. 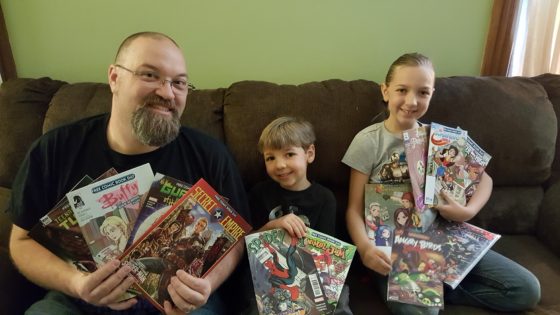 The kids had gotten some discount coupons and so we bought a couple of things including a collected 6 issue set of X-Men Evolution that was based on the cartoon. We had 60% off the final purchase so that was great.

On the way home I gave the kids their comics. Andrew flipped through Animal Jam and was done. Eva read through her Disney Princesses comic (another that we bought) and when we got home she continued reading. We had to make her get up off the couch so we could take the photo above. Seeing her excited about comics and wanting to read more of them made going in the rain with no sleep totally worth it. Having the kids excited to do something dad loves was also worth it.

While we didn’t stay too long at the event we made sure to get some photos with cosplayers who were doing Guardians of the Galaxy including the owner, Randy who was Star-Lord! We always make sure to get a photo with Randy because he always dresses up. We had a great one from a ear when Eva was Toruun and Randy was Thor. Then I tried to get to sleep after reading one of my comics.