Moved into a new phase with Andrew today. The last couple of months I’d been taking Andrew to swimming lessons. The lessons were called Pike with Parent. This meant that I swam with Andrew. I was right there cheering him on and catching him as he yelled “Cannonball” at the top of his lungs and launched himself into my arms. I saw him improving and improving through the classes and I love being able to be right there with him.

We started a new session of Pike with Parent with a new teacher. The new teacher is a bit abrupt and wouldn’t let the kids and parents play together while waiting for class to start. Then through the course of the class she had us stay off to the side while the kids did their own swimming. And by the end of the class we were out of the water watching as the kids did their jumps. I was feeling really sad that I couldn’t catch Andrew when he jumped.

So, the next class parents will be able to sit at the edge of the pool with their feet in the water while the kids swim. The class after that we won’t get near the water at all. This went by so quickly for me and the abrupt change in style between the last instructor and this instructor knocked me for a bit of an emotional loop. I am going to miss being there in the water with Andrew.

Andrew, though, excelled in the class. He was the strongest and fastest swimmer. He jumped out the furthest. The instructor better move back because he doesn’t just jump he launches. I look forward to seeing Andrew improve each week.

We put Andrew into swimming lessons a couple of weeks ago. We missed it last week. This week however we were in a new class because the class that we were in at first ended up merging with the new class. Andrew loves being in the pool. He splashes around, laughs and shrieks. While he has no clue how to scoop and kick he is getting exposed to the water and he likes it. The one thing that he does pretty well is he climbs out of the pool. We’ll have to keep up with classes for both kids so that they continue to be comfortable in the water. He certainly was excited to get to the pool today. 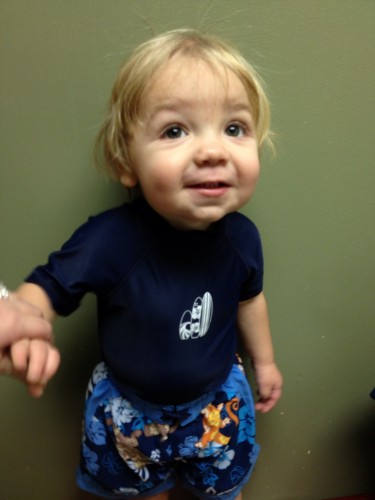 Don’tcha just love that face. There is a photo that Allison took of the two of us in the pool but I look like I have a yeti vest on. Which, since I am a pretty hairy ape (except for my shoulders) would be accurate.