No, not because Blog World Expo is going away but because it is changing its name to New Media Expo! The new hashtag is #NMX and there is even a logo contest where the person who creates the logo can go to New Media Expo for life. so cool. Now, how to create the winning logo….

Took this photo from the train on the way home. I was futzing with the internet and the sun kind of shone funny so I looked up. When I did I saw a really cool splash of sunlight on this bridge. I quickly switched on the camera on my iPhone and started shooting out the window of the train. So the train is speeding along and I am rapid fire shooting to catch the image I saw and this is the one I liked the most. I love how the sandbar in the image leads you out to the bridge. The original image was very nice too but I did crop it a bit to take out the window reflection and used a couple Instagram filters to pump the colors to what you see. I almost missed this all together because I looked up and though, “Oh hey, that sunlight looks amazing, like a photo…. Oh wait I need to shoot that!”

Today at Blog World Expo I got up after a rather late night, writing yesterday’s post. But early for me and I started to walk to the Javits again but my feet were sore so I walked to the shuttle instead and caught a ride. I got there early so I hung out at the power tables (tables with power strips, thank you for that BWE!). While I was there I met Kenji O. Kenjoi works on the app, Telenav plus their brand new app Scout. Back last summer when I did the Telenav campaign I worked with Kenji and today was the first time I ever met him in person, and that was cool. We took a photo together with the XShot. 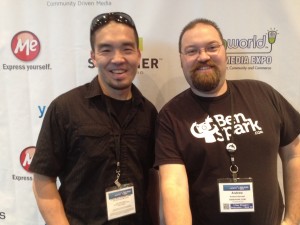 Then I went to Ted Murphy’s session which was the State of Social Media Sponsorship. I had along with me a present for Ted. Allison knit him a bacon Scarf. He liked it so much that he even wore it for his presentation. That impressed me but what impressed me more was that he was able to switch gears quickly when his computer with his presentation locked up. He was able to switch to the Q&A portion and also bring me up to a flipboard. I’m always impressed with Ted’s speaking ability and his energy. We also took an XShot Camera Extender photo. 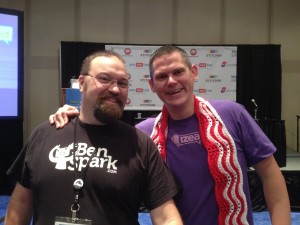 After Ted’s session I went to see two fantastic sessions which were Podcasting 101 and Podcasting 101 part two. Even though I am part of Geek Dads Weekly and I listened to all of Daniel’s podcast called Be a Better Podcaster (All the guys I talked to on the panel knew QAQN right away). The sessions were great because in addition to the slides there was a link to the full presentation so we could listen and ask questions and enjoy the content. And the content was good, it wasn’t smarmy and me, me ,me like some other sessions I saw and walked out of. this was good content plain and simple. I’m inspired to do something with a podcast this year. I just have to take the step to start talking on my own. I love being part of Geek Dads Weekly but want to do my own thing as well. I say as well because I love doing Geek Dads each week. And hope to get back to regular schedule soon. Here are the panelists from the session Ray Ortega, Daniel Lewis, Dan Lyons and Dave Jackson. 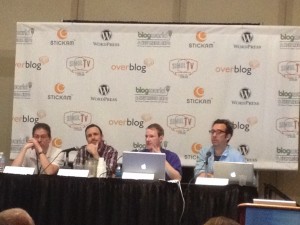 After that I walked the floor for a bit and while I did that I met Michael from RawPorter which is a pretty cool sounding app. You can get paid for content that you create like photos or videos, right up my alley. People send out requests for specific photos or videos and it might be based on your location but you can go and shoot a video or a photo and submit it. If the user decided to use your image you get paid. Pretty cool. I wonder if anyone would buy this photo of me and Michael with my XShot. 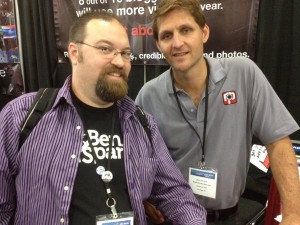 After lunch I went to a session and was turned off pretty much from the jump. But I caught a quick couple of winks and stayed because the session that I really wanted to see was next.

While the session it self was not that dynamic I did get to listen to and meet Keenan Cahill. Keenan is a YouTube sensation who is known for making lip syncing videos in his bedroom. He did a Katy Perry song and she tweeted him and the rest is history. the thing I like about Keenan’s story is that he was 13 when he started and he had a lot of haters. People on YouTube leave some of the worst comments ever because they are anonymous and say the most hateful and hurtful things. I can’t handle that sort of venom at age 38 I can’t imagine how crushed I’d have been at 13 years old when I was going through puberty. So I am impressed with Keenan and how he does what he loves despite what anyone says. I personally love his videos even if I’m not into the same music that he likes. I still enjoy the video. I tried to tell him all that in a couple sentences but pretty much got out, “Hey, nice videos keep doing them.” But he did allow me to take a photo with him. 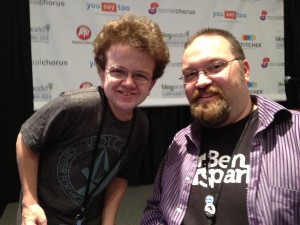 When the sessions were over it was time for the final session which was New Media LIVE! It was a comedy show and the opener Jordan Cooper was not only unfunny but pretty offensive to the audience and downright rude to Chris Brogan. Not funny at all. Plus he was a dick to me earlier at the table. I said to him that “oh hey, I know who you are I’ve watched your videos”. He snidely said that he took them all down (Maybe he was being funny but it came across as really snide). Well, I didn’t watch them yesterday. No reason to be a jerk and if that was humor well I can understand why many people did not laugh at his jokes. The only comedian who’s gonna give me a ration of crap is Mike Schmidt because at least he is funny about it.

After the opener cooled the crowd it got warmed back up by Mark Malkoff. I saw him interview Jenny Lawson and Chad Vader but had to leave to catch the train. I laughed at their stuff and hated leaving so early but glad I did because I caught the last shuttle exactly on time for Penn Station. And my train even left on time. So happy about that. If the internet holds and I can post this I’ll be ecstatic.