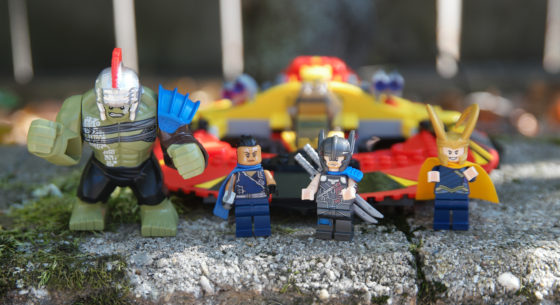 A while back I went to the LEGO headquarters in Enfield, CT. While I was there I went to the employee store with our host. I was able to purchase some different sets including the two Thor Ragnarok themed sets in their Marvel Super Heroes line. I’ve been wanting to build these sets for a while and I finally got a chance to do so in the past couple of days. Because I am headed to L.A. for the #ThorRagnarok Event I figured that I would also livestream my build and talk about the movie in the hopes that there would be people who would be interested in asking me questions about the movie or have questions to ask the cast. I do not know, at this time who I will be interviewing while I am there but it will be a couple of people, I hope. I put both of my livestreams on Facebook and then uploaded them to YouTube. You can find them in various places but I will also embed them here. Look for them below.

The second set was the Ultimate Battle for Asgard which I again did on a Facebook Livestream but this time on the BenSpark Family Adventures page. That got far less people watching, but my friend Derek was watching and he was pretty engaged.

You can buy both of these sets on Amazon.com.