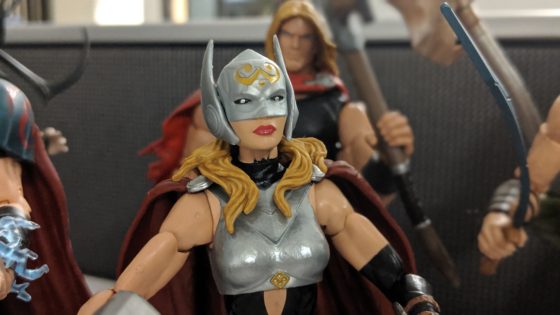 A couple years back when Thor Ragnarok came out in theaters Hasbro put out some Marvel action figures for the movie that also included other Thor comics characters. One of those was the Jane Foster version of Thor. In the comics Jane Foster was thor’s girlfriend. Thor was either lost or unworthy or something and Jane then became Thor. Actually Nick Fury whispered a secret to Thor and it caused him to be unable to wield Mjolnir. However, she was also with Cancer and each time she transformed into Thor it would get worse. The reason why is that when she became Thor all of the poisons would purge from her body, that includes chemotherapy. Jane Foster is currently Valkyrie and is now Cancer free.