The theme from Nintendo this year for E3 is to bring E3 to the people. I go to a ton of conferences and E3 is one that I have not been able to attend. I hazard to guess that the majority of gamers out there have never been to E3 but are eagerly awaiting news that will be coming out of the event. Nintendo is doing something different this year and it is bringing their unreleased games into Best Buy so that gamers can experience them. I learned about this while watching the May 17 Nintendo Direct address. The video is 28 minutes long and has so much information contained within it.

One of the titles that is discussed in the video is Donkey Kong Country Returns 3D for the Nintendo 3DS. I received a press release about an upcoming event at the LA Zoo. Here are some details.

“Fans will get a chance to spend time with Donkey Kong and some of his friends from the animal kingdom at the L.A. Zoo this Memorial Day weekend,” said Scott Moffitt, Nintendo of America’s executive vice president of Sales & Marketing. “They’ll be able to experience a fun day with Nintendo at the zoo and play Donkey Kong Country Returns 3D.”

One of the weekend’s main events, a “Donkey Kong Interactive Experience,” allows visitors to watch L.A. Zoo staff feed the real-life gorillas from giant cardboard barrels that are inspired by the barrels featured in the video game. This friendly, educational activity is a one-of-a-kind experience for families and a treat for the gorillas. In addition to the feeding, there will be opportunities for fans to take pictures with the costumed Donkey Kong character around the zoo.

“Our gorillas have never had a visit from a celebrity of Donkey Kong’s stature,” said John R. Lewis, director of the Los Angeles Zoo. “All the planned activities for the weekend fit perfectly in line with the family-friendly environment of the zoo, as well as bring awareness to the animals in the gorilla reserve.”

The original Donkey Kong Country Returns game has been rebuilt from the ground up for ease-of-play on Nintendo 3DS. Players control iconic character Donkey Kong as he runs, jumps, blasts, rides and pounds his way through a series of beautiful, challenging, side-scrolling levels. The upcoming game is optimized for portable play and features a new mode, eight additional levels and stunning 3D graphics.

Nintendo is also taking on Sega properties as well. They have an exclusive partnership with Sega to produce Sonic the Hedgehog titles. The major title is Sonic Lost World which is a new action platforming game, and more information about it will be announced before the E3 2013 video game trade show begins on June 11. There are many more titles coming and also some being released to the Nintendo eShop and to the Nintendo 3DS platform. Here is an image from Sonic Lost World. 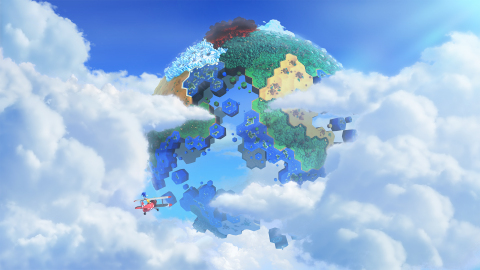 There are many more announcements to come from the partnership between Nintendo and Sega. Here is an excerpt from that press release.

“Sonic the Hedgehog has proven incredibly successful on Nintendo platforms and we are pleased to continue our long-standing relationship with Nintendo,” said John Cheng, President & COO, SEGA of America. “As we initiate this new exclusive partnership with the next three titles we believe that Wii U™ and Nintendo 3DS™ are ideal platforms to showcase the evolution of the Sonic brand.”

“A strong launch for LEGO® City Undercover: The Chase Begins helped Nintendo 3DS™ maintain its torrid pace in 2013. Through the first four months of the year, Nintendo has already sold more than 2.1 million units of first-party Nintendo 3DS software in the U.S. alone, an increase of 52 percent over the same time period last year. In 2012, it took 30 weeks for Nintendo 3DS to sell 2 million units of first-party software. In 2013, the platform accomplished that same feat in 18 weeks.

With the peak holiday selling season still ahead and a strong lineup of upcoming games that includes Donkey Kong Country™ Returns 3D on May 24, Animal Crossing™: New Leaf on June 9, Mario and Luigi™: Dream Team on Aug. 11, as well as new titles in the Pokémon™, Mario Golf™ and Legend of Zelda™ franchises, Nintendo 3DS is poised to have the strongest year of sales in its history.“

Here is a teaser for Mario and Luigi Dream Team.

So, as you can see there are a ton of things happening for Nintendo right now. For me personally, I’ve spent a lot of time lately with the Nintendo 3DS. I’ve played through all of LEGO City Undercover: The Chase Begins and also completed Transformers Prime. I’m working on Epic Mickey for that too. On the Wii U side I’ve been leveling up my Skylanders figures and haven’t finished Giants yet because I wanted all the figures to be at their maximum potential before I tackled completing the game. I like to make sure that I’m at 100% complete when I complete a game. And after that I’ll probably go back to LEGO City Undercover to finish that game 100%. so much more to explore there.

One thought on “Tons of Nintendo News Leading to E3”