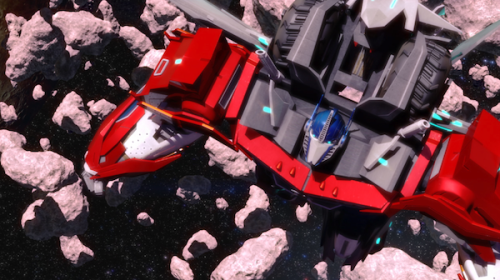 On Tuesday October 8th the movie Transformers Prime: Beast Hunters: Predacons Rising will be available to purchase. I received a Blu-ray/DVD copy to watch and review. I wrote an early review of the movie but wanted to go into a little more detail and hopefully, not give away any spoilers. Haven’t heard about the show or the movie, here’s the trailer.

The movie takes place after the events of the series finale of Transformers Prime. The Autobots are now on a Cybertron that is beginning to be rebuilt. Optimus and the crew are just beginning that rebuilding process after they revived the planet’s core. The movie explores some themes that I hadn’t thought that a Transformers franchise would explore and they do something so very interesting with Megatron that you have to watch it to get the full effect. He’s bigger, badder and meaner than ever but something happens to him that I never thought I’d see.

Predaking is still around, nursing his wounds from the battle with Megatron in the series finale. But there are other predacons around and we see how they all interact with each other.

Optimus goes on a quest to find somethign that he hid from Megatron during the Great War. Bumblebee shows more of his mettle. The other bots are part of the story but sort of take a smaller role in deference to Bumblebee, Prime, Megatron and Predaking. It was a very compelling story.

If you would like to win a copy of the movie (on DVD) you must reside in the United States, can provide me with a mailing address and can answer me this question.

Who is your favorite Transformer?

Leave the answer in the comments below. I’ll pick a winner this Friday.

Brimming with spectacular CG animation, a captivating storyline and unforgettable characters from the TRANSFORMERS PRIME lore, this 90-min epilogue to the final season delivers entertaining cinematic adventure the whole family will enjoy. Wrapping up the series that chronicled the epic battle between the DECEPTICONS and the AUTOBOTS, the Blu-ray+DVD combo pack and DVD edition contain insightful bonus content, taking viewers behind-the-scenes. Available in stores everywhere, TRANSFORMERS PRIME BEAST HUNTERS – PREDACONS RISING is an essential home entertainment collection for TRANSFORMERS fans of all ages. The deluxe Blu-ray+DVD combo pack is priced to own with a suggested retail price of $24.97; and $16.97 for the DVD.

TRANSFORMERS PRIME BEAST HUNTERS – PREDACONS RISING Synopsis:
A resurrected UNICRON has taken over the now-lifeless body of MEGATRON to seek vengeance on the AUTOBOTS and ultimately, the destruction of Cybertron. This formidable enemy forces an unlikely alliance between the AUTOBOTS, DECEPTICONS, PREDAKING and two new PREDACONS, who come together in an epic battle to help protect their newly restored planet.

About Hasbro Studios
Hasbro Studios is the Los Angeles-based entertainment division of Hasbro, Inc. (NASDAQ: HAS). The studio is responsible for entertainment brand-driven storytelling for the company across television, film, commercial productions and short-form. It develops, produces and distributes TV shows based on Hasbro’s world class brands, including TRANSFORMERS, MY LITTLE PONY, LITTLEST PET SHOP and FAMILY GAME NIGHT. Many of these shows air on Hub Network, a U.S. television network for kids and their families, that is a joint venture between Hasbro and Discovery Communications (NASDAQ: DISCA, DISCB, DISCK). Hasbro Studios shows can also be seen on networks in more than 170 countries globally. Since its formation in 2009, the studio has received seven Daytime Emmy wins and 16 nominations. On the film side, the studio is developing and producing a number of features based on Hasbro’s brands, including TRANSFORMERS 4 (Paramount), STRETCH ARMSTRONG (Relativity Media) and CANDY LAND (Sony). The studio team also oversees the production of commercials that feature Hasbro’s brands as well production of short-form content that can be seen on all of the major digital and social media platforms globally.