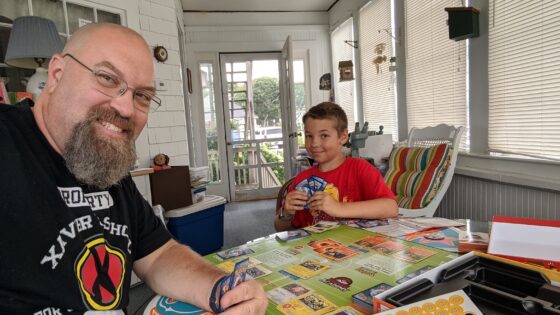 I received my Sweet Suite Swag box today. This is a box full of toys and games send as promotional materials for attendees of Sweet Suite. This year Sweet Suite was a virtual conference and it was done really well. I was able to meet with many of my favorite companies to discuss working with them to review and promote various toys. I’m always on the lookout for great toys and games to share with my readers. One game that I was super impressed by was Pokemon Battle Academy. I was so excited to find that it was in my swag box. But, before I get too far ahead of myself maybe you should check out the unboxing video to see what else I received.

The box was FULL of great toys and games. I have a lot to do with them in the coming weeks. Some items will be donated to Christmas is for Kids and some will have their own videos made. One got played with today almost immediately. Eva set them all up so I could get a full shot of everything that I received. 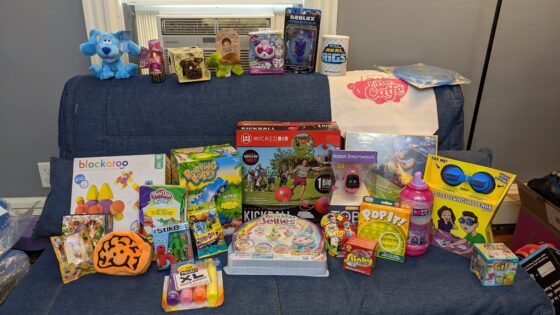 The game that got almost immediate play was Pokemon Battle Academy. I took Andy to the Cape and when we arrived we played our first real game together. Once he tried to teach me according to rules he learned in school which were dubious at best. He learned the game from another kid who had no idea how to really play the game. I never learned the game because at the time when Pokemon came out I was 26 years old and was no interested in it so I never got into it and learned. Andy has played in school and is excited about the game so I figured it was high time I learned.

The board game has three special decks that include special cards that are set up specifically to teach someone how to play the game. You really only need to do the step by step instructions once to get the hang of it but that first time through with the instructions is crucial to new players understanding the game. We only did the basic part of the game with two of the decks. There is a third deck that helps players learn the more advanced techniques and mechanics of gameplay. Later that night I played the game with Eva and she beat me. We played a nice long game. We can use the game board to play Pokemon with any of the cards that Andy already owns and so when we return home we’re going to have to go through all his cards and start making some decks. With both kids and I being fans of the game now it looks like I may be snagging booster packs from time to time for everyone to enjoy. You can find out more about the game below and I have also included out Amazon.com affiliate link for Pokemon Battle Academy.

Bellevue, Wash.—July 31, 2020—Today, The Pokémon Company International has broadly released the Pokémon Trading Card Game Battle Academy, the first-ever board-game adaptation of the best-selling Pokémon Trading Card Game (TCG), at participating mass and hobby retailers around the world. It is also available through online retailers such as PokemonCenter.com, the premier destination for official, high-quality Pokémon merchandise in the US.

Designed for Trainers of all types, including parents and children who may be new to the Pokémon TCG, Battle Academy reimagines strategic Pokémon TCG gameplay as an easy-to-learn and fun-to-play experience for the whole family that comes in a classic board-game format.

“For more than 20 years, the beloved Pokémon Trading Card Game has connected people across the globe over their shared love of collecting cool cards, trading them with friends, and playing the official game,” said J.C. Smith, senior director of consumer marketing at The Pokémon Company International. “With Battle Academy, we are excited to give families a fun and accessible way to spend quality time together while bonding over something both kids and longtime fans of the franchise adore: Pokémon TCG cards.”

Including everything a Trainer needs to master the basics of the Pokémon TCG, each Battle Academy box comes with a two-player game board, three 60-card decks, tutorial guides, gameplay accessories, and a code card for the free-to-play Pokémon Trading Card Game Online on iOS, Android, and Pokemon.com.

About Pokémon
The Pokémon Company International, a subsidiary of The Pokémon Company in Japan, manages the property outside of Asia and is responsible for brand management, licensing and marketing, the Pokémon Trading Card Game, the animated TV series, home entertainment, and the official Pokémon website. Pokémon was launched in Japan in 1996 and today is one of the most popular children’s entertainment properties in the world. For more information, visit www.pokemon.com.