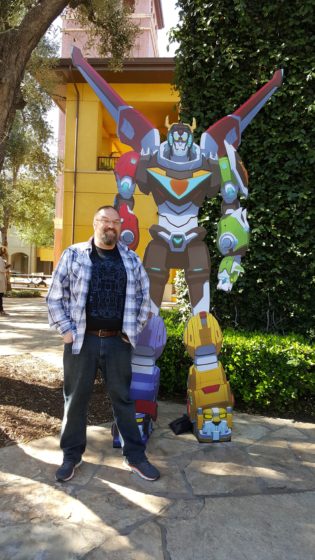 I was lucky enough to be invited to DreamWorks Animation Studios on behalf of Netflix to preview the first episode of Voltron: Legendary Defender and interview the creators and cast. I am a member of the Netflix StreamTeam and as such receive various compensations for review and promotion of Netflix shows. Opinions are 100% my own.

Sometimes I have to pinch myself regarding the luck that I have. I would never, in a million years, think that I would be headed to DreamWorks Animation Studios in California to not only see the pilot episode of Voltron: Legendary Defender but also get to interview the creators and cast. I was also a bit starstruck because I got to meet one of my all time favorite voice actors, Josh Keaton. And you know what, he was a pretty chill dude. We talked about television and cutting the cable cord and all the ways you can get TV without cable. Ways like subscribing to Netflix. You might not realize it but Netflix produces so many different types of content and Voltron: Legendary Defender is but one of them. One amazing show full of incredible heart. When our viewing was over I just wanted to know what was going to happen next. I am looking forward to sharing this show with my kids.

I did not grow up watching Voltron. It was only able to be seen in the next town over at my cousin’s house. So, I saw it once in a while. What I did see of it was very impressive. I was very much into robots and such as a kid and I bet that if I could have seen all of Voltron I would have been a huge fan. It is okay because now I am a huge fan of the brand new show. I liked everything about it. The old school animation look of it, the voice actors and the storyline. 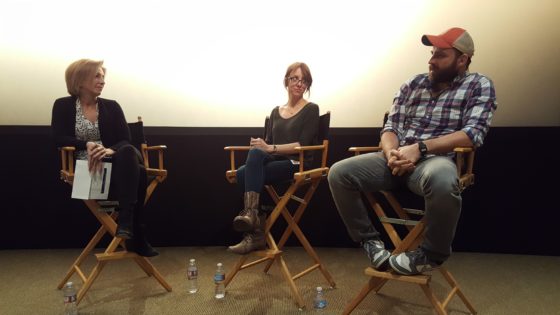 The first people that we met with were Executive Producer, Joaquim Dos Santos and Co-Executive Producer, Lauren Montgomery. These were the folks responsible for creating the all new Voltron show. If you are wondering who these folks are, don’t worry, their credentials are more than sound. Joaquim worked on The Legend of Korra and Avatar: The Last Airbender. These are two great shows with loyal followings of fans. Lauren worked on The Legend of Korra. The two have so much love for Voltron and are doing their best to give it the proper treatment that it deserves.

After meeting with the producers we went and had a great lunch and there were these awesome Voltron placemats. I wanted to grab one of each one so that I could color them in. I didn’t and that is good, because I have them available to downkoad, You can Download the Voltron Coloring Placemats. 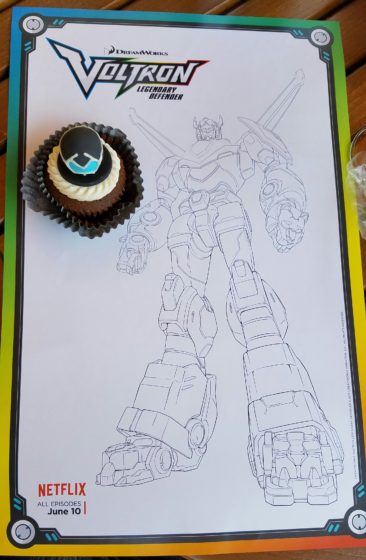 The heart of Voltron is the team. Working together as part of a team is a huge theme in this show. Each of the pilots must work together with their lions and as a team to form Volton. Without them in concert with each other they would be unable to form Volton. Each lion and pilot have a distinct personality. I don’t want to give anything away about the personalities of each of the pilots and those of the lions. Although if you are following Voltron on Facebook than you are seeing some little profiles of each pilot. The reveal within the episode is cool and I wouldn’t want to spoil it for you on June 10 when Voltron arrives. 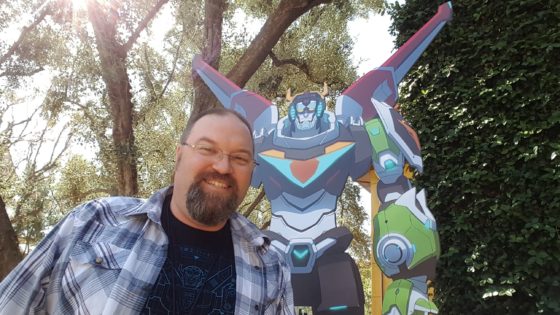 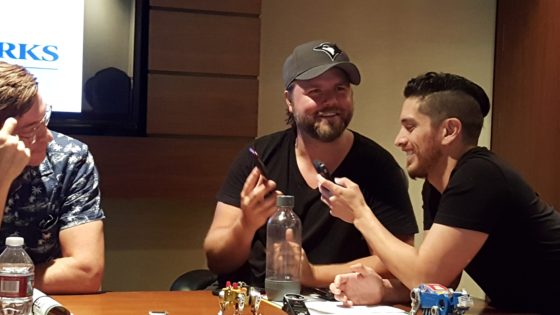 Tyler Labine and Josh Keaton check out The Rock Father’s childhood photo in his Voltron costume while Rhys Darby looks on.

Beyond seeing the first episode the highlight of my day at DreamWorks Animation Studios was interviewing the voice actors, Josh Keaton, Tyler Labine, Rhys Darby and Kimberly Brooks. They each sounded genuinely excited to be a part of the show. John and Tyler really geeked out over the toys that some of the bloggers brought with them. We talked about how Voltron influenced our growing up and play. We also discussed the original show and how as kids it was amazing but looking back on it our kid brains must have filled in so many gaps. I think that we all agreed that Voltron: Legendary Defender has the feel of what we experienced when watching the show as a kid. It has the action, humor, adventure and heart that our kid brains remember, but at the same time it is totally accessible for anyone new to Voltron, like our own kids. June 10th is going to be legendary on Netflix with Voltron: Legendary Defender.

3 thoughts on “Voltron: Legendary Defender Leaps into Action on June 10 on Netflix #StreamTeam”