I am not a fan of reality shows. I hate them with a passion. With that being said I actually have a soft spot for Oprah’s Big Give because of the good things that the people are doing. We watched the show last week and it was heartbreaking, uplifting and moving all at the same time. Then at the end of the show there was a promo for this Sunday’s episode, tonight’s episode. I saw the commercial and started crying. There was Mike and his family on Oprah’s big give. 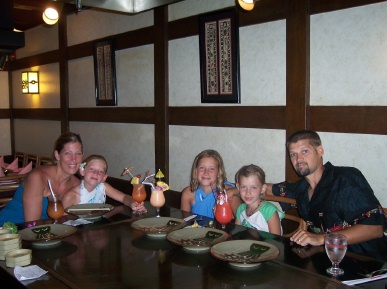 Mike Machinski and his wife Becky (a classmate of mine from high school) and their three beautiful little girls have had it rough for quite a few years. Here is an excerpt from the Machinski’s personal online journal.

” Four years ago, on March 15, 2004, Mike was diagnosed at age 31 with Stage 4B Advanced Hodgkinâ€™s Lymphoma. Mike is the loving Daddy to our three daughters, Kylie (now age 10), Mya (now 8)and Emma (now age 7). He completed 5 months of chemotherapy treatments called BEACOPP from March through August ’04, having 18 treatments in total. There were hospital in-patient stays, operations and blood transfusions that came with his treatments. He was in remission for just 8 weeks when another lump was discovered on Mike’s neck. During the third week of October 2004, we were told that Mike had a re-occurrence. His remission time was much to short. During October, November and December 2004, Mike went through 3 cycles of I.C.E. chemotherapy for Re-occurring Hodgkinâ€™s Lymphoma. Each cycle required him to be an inpatient at the hospital for four days. This chemo regiment is very aggressive and required frequent blood transfusions.

Since Mike was in remission for a short time and had a quick re-occurrence of his disease, the next step in beating his cancer is a stem cell transplant. Mike received a full Allogeneic re-lated Stem cell Transplant at MD Anderson in Houston, Texas on February 14,2005. On Wednesday, May 18th, we learned that Mike is once again cancer free. On May 22nd, our family left Houston and road tripped back to Pennsylvania. In September 2005, Mike started back at work after almost a year on disability. For almost two months, life felt normal and on November 7, 2005- Mike’s PET scan showed that the cancer was back. More chemotherapy followed and on April 6, 2006, came the beginning of three weeks of radiation treatments. The summer of 2006 included 60 radiation treatments for Mike. He had radiation 5 days each week for 12 weeks. From that, the results came back that it had not gone away and in early November, 2006, Mike began chemotherapy again. Through the holiday season 2006, Mike took a chemotherapy pill of 50 mg Vepesid (Etoposide)each day. January 2, 2007, he had another PET scan which showed that the chemo had not been effective in slowing growth of the cancer in all areas. During the months of January and February of ’07, Mike was on Holistic Supplements but lost to much weight and the 3rd week of February, began Radiation treatments again. Mike has completed a total of 120 Radiation treatments and currently goes to the Woodlands Center in Quakertown once a week of IV Vitamin C infusions. His PET scan in January 2008 showed a spread into the Lung. Please continue to PRAY!”

In November of last year I got to meet Mike personally at my 15 Year High School Reunion. That night was also a benefit evening to raise money for the Machinski family. We raised over $1600 and that includes some money from the sales of the 2008 Photo-A-Day calendar and the donations that bloggers gave to me to give to the family.

Please watch the episode tonight. I think it will be an example of Hope and help and love for a family that has endured such hardships for so long and has shown how love can help so much.

Also please visit Becky’s online store called Hope Creations. She makes jewelry and sells it at a physical store as well as online. She even donated some for the silent auction at the reunion.