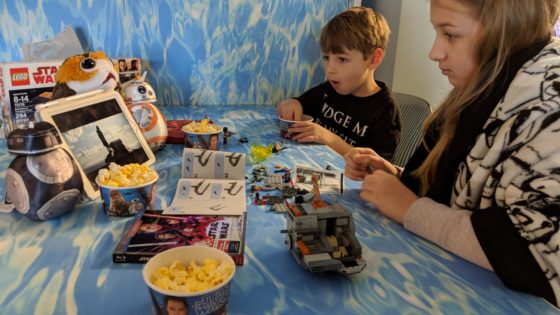 The biggest hit of the entire in-home viewing kit was the stuffed Porg. The kids took turns being the keeper of the Porg, over and over again. The Porg was everywhere, just like in the movie. And, once we got home the kids worked out a system in which one child would keep the Porg for the weekend and the other during the week. They really loved that thing. Andrew got it for this photo. 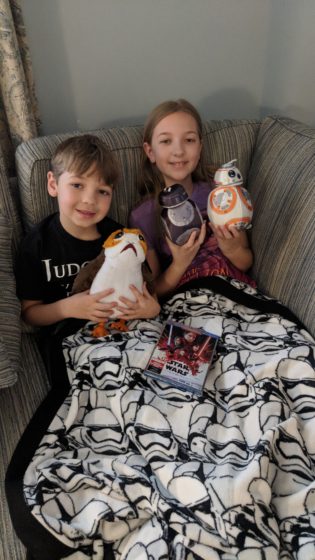 So, we popped the popcorn and enjoyed out new stuffed characters. We also watched around the little table and ate the popcorn while building the LEGO set. As we were building we got to the part where Finn and Rose went in search of the code-breaker and the kids recognized the ship that they were building. It was a fun afternoon of family downtime and more bonding over a franchise that we all love dearly. 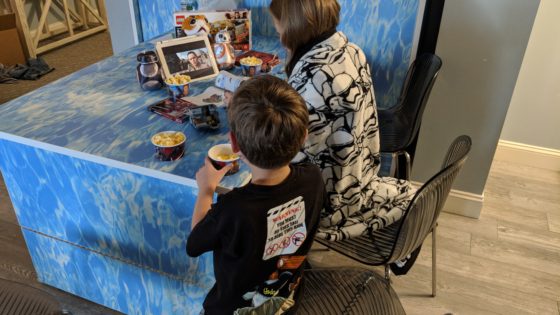 Since we weren’t home we couldn’t make anything besides the microwave popcorn that was in our viewing kit but had we been home then we could have tried out some Star Wars: The Last Jedi recipes like the ones below. Just click the image to download the recipes. 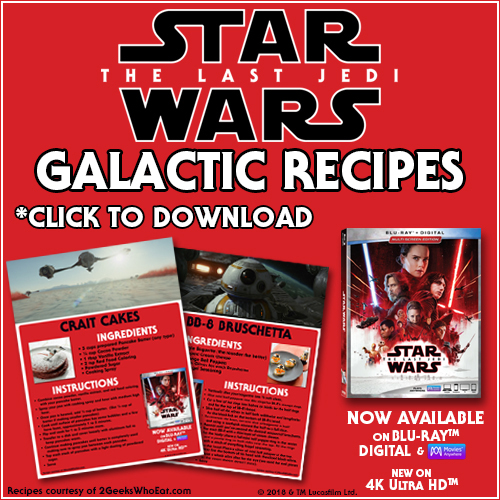 We enjoyed seeing the movie as a family and if your family is interested in seeing the movie, too then make sure that you enter my Digital Download giveaway. I am giving away FOUR copies of the movie. That also includes extras like the gag reel.

More about the movie and Blu-ray below.

Director Rian Johnson takes fans on an intimate journey into the creation of Star Wars: The Last Jedi in a feature-length documentary, explaining his unique interpretation of the Force, detailing the painstaking process of creating Snoke, and deconstructing action-packed scenes from the film such as the epic space battle and the final confrontation. Johnson also reveals two exclusive scenes, featuring Andy Serkis as Snoke prior to his digital makeover, as well as 14 never-before-seen deleted scenes, in addition to his audio commentary.

Star Wars: The Last Jedi is packaged several ways to ensure fans get the most out of their in-home viewing experience. The Multiscreen Edition (formerly the Blu-ray Combo Pack) includes Blu-ray, and a Digital copy, giving viewers the flexibility to watch the film on different devices. Those with 4K Ultra HD capability may opt for a 4K UHD Collector’s Edition, including 4K Ultra HD disc with Dolby Vision and Dolby Atmos, Blu-ray disc, and a digital copy (where available). Dolby Vision delivers greater brightness and contrast, as well as a fuller palette of rich colors. Dolby Atmos places and moves audio anywhere in the room, including overhead. Together on 4K Ultra HD Blu-ray disc, viewers will practically feel the Force in their own home.

One thought on “We had a Star Wars: The Last Jedi Viewing Party While on Vacation”